The Ultimate Guide to Mid-Level Giving - Part 1 of 4 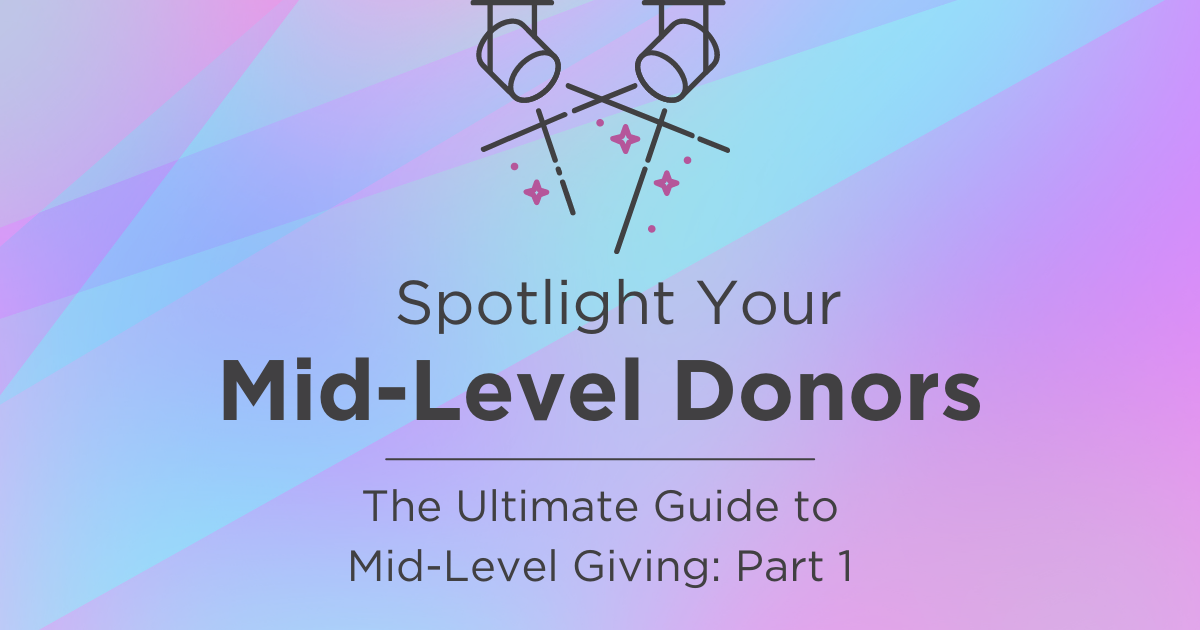 The Case for Developing a Mid-Level Giving Program

This is the first post in our series about mid-level giving programs. Read Part Two, Part Three, and Part Four.

The coronavirus pandemic did more than scramble schedules and upend plans; it also created mixed signals for fundraisers. On the one hand, 2020 saw big jumps at all giving levels, with small gifts (less than $250) boasting an impressive 15.3 percent increase from the previous year, according to the 2020 Fourth Quarter Report from the Fundraising Effectiveness Project (FEP). And, while fundraising through the first three quarters of 2021 kept apace with 2020 levels, the number of donors fell by an estimated 1.7 percent during the same period. In addition, the overall donor retention in that time dropped 7.2 percent.

Those decreases are troubling. While 2020 saw the number of new donors surge in response to the pandemic, it’s unclear whether the same level of generosity will extend through the third year of the global health crisis. It’s also usually cheaper to retain donors than it is to acquire new ones, suggesting that the choppy waters fundraisers navigated over the last two years may remain into 2022.

Take heart, fundraisers — smoother sailing may be found among mid-level donors. Defined by the FEP as supporters who contribute between $500 and $5,000, the subset saw less of a decline than other donor groups, as reported in the organization’s 2021 Third Quarter Fundraising Report. That data point, along with others we’ll address in the next section, suggests that the value of mid-level donors has yet to be fully recognized by the nonprofit sector. It’s worth taking a closer look at this donor class and considering how your organization can build a giving program around them and the ways they can provide ballast during stormy fundraising periods.

Who do we mean when we say mid-level donors? They’re supporters who fall somewhere between direct marketing (the one-to-many approach) and major gifts (carefully crafted one-on-one relationships). What each organization defines as mid-level depends on various factors — the organization’s size, its average gift size, and so on — but a common range, according to Meyer Partners, falls between $1,000 and $10,000 donated annually. New research continues to underscore the significance of this group of supporters, and organizations are increasingly establishing or staffing up mid-level giving programs.

For example, adding to Sea Change Strategies’ recent study of mid-level giving, Sylvia Brown, creator of the “Smart Donors . . . Make a Difference” online courses and workshops, partnered with Boston College School of Social Work assistant professor Cal Halvorsen in 2020 to learn more about this important subgroup of donors. Looking at 1,260 Americans aged 35 and up whose total donations equaled $2,000 to $20,000, the duo found that the group contributed a higher share of their earnings (1.9 percent) than the national average.

That’s a powerful finding when coupled with results from Sea Change Strategies’ earlier analysis: In the first of the organization’s studies, mid-level donors, though small in number, produced as much as 33 percent of the income that nonprofits raised from individuals. No wonder, then, that Brown recommends fundraisers focus their attention on those with an annual income of $100,000 to $200,000 (roughly 20 percent of Americans).

In fact, if you examine your direct marketing program, you’ll likely find that mid-level donors are its backbone. They’re “your most loyal group of donors and retain at the highest levels,” says Ryan Carpenter, vice president of client success at Pursuant.

Mid-level donors are simply the best segment for discovering major gift prospects not just for today, but for five years down the road. But, as their giving increases, they may drop off if they’re not addressed or treated differently from your mass-market audience. You’ll win loyalty when there’s an intentional strategy for engaging, retaining, and perhaps nurturing mid-level donors for the next level of charitable giving.

And if they don’t stair-step up to major gifts? They can still make a big impact as legacy donors. It’s another way to think of the long-term stewardship of your mid-level program — as “a prime place for planned gifts,” says Carpenter.

Roadblocks You May Face

As compelling as the generosity and loyalty of mid-level donors may be, you may still find roadblocks to creating a program just for them. Most budgets simply don’t consider them. Plans for the fiscal year generally (and rightfully) dedicate resources towards major gifts and direct marketing efforts, leaving little for new initiatives.

And then there’s the tech hurdle. Without technology that can easily produce data insights such as where else your donors have contributed or who’s in danger of lapsing, gathering the intel you need is time-consuming and cumbersome; it may not even yield information you can act on. Finding the right tech solutions, such as Pursuant’s GivingDNA platform, can help you shape an efficient and effective program that can automate otherwise unwieldy tasks and free you and your team to focus on relationship-building campaigns.

What team, you say? Although organizations have begun establishing mid-level giving programs, they’re not yet common, so finding in-house or external candidates with the skills and professional background to adequately staff such a program may not be easy. (We cover the characteristics and experience of the best candidates in “How to Build a Mid-Level Giving Program.”)

The Right Tool for Your Mid-Level Giving Program

To properly track your audiences — mass market, mid-level, major giving — you need a tool that can efficiently and effectively track them for your mid-level gift officer or team.

Take, for instance, Pursuant’s GivingDNA. After users upload the portfolio lists of gift officers within their organization to the platform, each officer or their manager can easily access powerful visualizations of their progress towards yearly goals as well as the donor health of their lists. Officers can also see where constituents are located at a state level — maybe they’re concentrated in a couple of states like Texas and Illinois, for example. In fact, users can drill down and discover concentrations at the county or parish level, which can be helpful when planning exclusive mid-level donor events or in-person visits with candidates for major giving programs.

Each visualization can also be downloaded with a single click, so gift officers can create reports for leadership or other colleagues without having to submit a request to a data or IT team. Managers can also quickly monitor their gift officers’ performance to see who may need help or who others can tap to learn what’s working best.

With an end-to-end solution like GivingDNA, fundraising teams across every giving level and program can better meet their goals and support the mission of their nonprofits. To learn more about the platform, schedule a demo today.

Respond to Challenges in 4 Easy Steps

Based on what we shared above, you already have broad data on the value of mid-level donors. Now it’s time to get specific on the potential returns that your mid-level audience offers your organization and cause. This is key information that can persuade leadership on the value of this donor class.

First, we have to define what mid-level means for your nonprofit. There are a few standard ways to do this. You could simply take the top 5 percent of your mass-market audience and call it a day, or you could define your mid-level as a range of $500 to $1,000 or up to whatever your major gift threshold may be. Another option is the following equation: 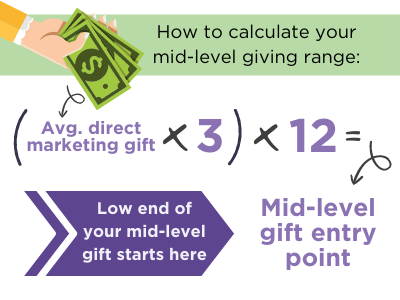 Once you have that sum, go back to your file and see how many constituents fit that profile. When you have that number, you’ll be able to predict the potential return of a mid-level giving program, e.g., “By creating such a program, we can expect a return of X because our addressable audience with upgrade potential is Y.” When nonprofits create strategies for engaging and elevating their mid-level pool, there’s a noticeable lift across that segment.

But remember: Efficiency is the name of the game. You’ll want to invest in technology (or augment your existing tech stack) to automate this work. Besides assisting your other fundraising efforts, the right software will identify which mid-level donors to target and when.

To help colleagues or leadership who may be skeptical of establishing a mid-level program, map the donor journey for them. There are plenty of well-known insights about annual fund and major gifts programs, but emerging data about the potential of mid-level giving programs is still trickling throughout the industry. By mapping the donor journey of your average mid-level donor, you (and your colleagues) will see that it includes touchpoints throughout the organization. From their start in direct marketing, mid-level donors who qualify would then move on to the newly created program just for them. The ones with potential to climb to major gifts would be passed on to that department. There’s a role for everyone to play, which can help dissolve departmental silos and territorial teams.

Raising funds for your organization’s mission is a shared goal, and mid-level donors offer predictable, lucrative support to celebrate and honor. “They may not get their names on buildings, but they’re the backbone of your direct marketing program and care deeply about your organization,” says Carpenter. “They should be appreciated and listened to.”

Continue to part two: How to Build a Mid-Level Giving Program.