With the turn of the calendar to mid-November, we’ve entered the final stretch of quarter four of 2021. But if you are a nonprofit communicator, you have probably been talking about and planning for a year-end giving push for months now. Research shows that year-end giving campaigns regularly pull in a majority of the budget dollars nonprofits need each year. That’s why so many nonprofit teams organize the entire year of communications around this single giving season.

One of the key -- if not THE KEY -- components of an effective year-end campaign is effective storytelling.

Enter the stellar resource StoryBrand. We recently invited our friend Dominique Glanville, of Heights Strategic Marketing, to our podcast to share how to use this tool at year-end. As a certified StoryBrand storyteller, Dominique advises clients on how to harness the framework described in Donald Miller’s book Building a StoryBrand in their marketing. If you’re looking to tighten up your year-end digital campaigns as #GivingTuesday approaches, read on.

The StoryBrand framework is based on the science of how the human brain is designed. Human brains are trying to do these two things, at all times:

Survival is our basic primal drive. We want to live for one more day! But we also want to live our best life, so to speak. Many of our actions also fit both buckets. For example, we work to survive, to have money to meet our basic needs of food, clothing, and shelter. But we also work to thrive, to use our skills and gifts to make the world and life better for everyone.

Whatever we chalk up to surviving and thriving, all that effort takes effort. With every request for time, attention, distraction, our brains are asking questions like What do I need to spend my time on? What is important? And what can I cast to the side? Answering these questions allows the brain to decide how to allocate your internal energy resources to have enough in reserve for optimum surviving and thriving.

What does all this brain science have to do with nonprofit fundraising? Everything.

With so many messages bombarding our brains every day, we must send donor messages that stand out above the noise. Segmentation and data analytics help fundraisers to be smarter about doing that. But the question is once we get in front of the audience we’re trying to reach, are we using the opportunity well, or are we wasting the opportunity? And as we think about how much the noise increases at year-end, noise is truly the enemy of our fundraising efforts.

Using the StoryBrand framework helps you cut through the noise, attract your donor’s attention, deliver a message that the donor receives and deems important, and motivates the donor to act and give.

Every movie we watch, every book we read, and every play we attend has seven key elements in it. The elements are present no matter where the story is told or what format is used to deliver it. That’s because a story is essentially a sense-making device. It’s a narrative framework that has been around since the time of Aristotle. He was one of the first people to articulate why storytelling—particularly the order and progression of a typical story—speaks so well to the human brain and soul.

Applying these seven steps to your donor messaging will make sure that you are capturing their attention and then doing something with it that’s productive, not wasting your time or your donor’s time. 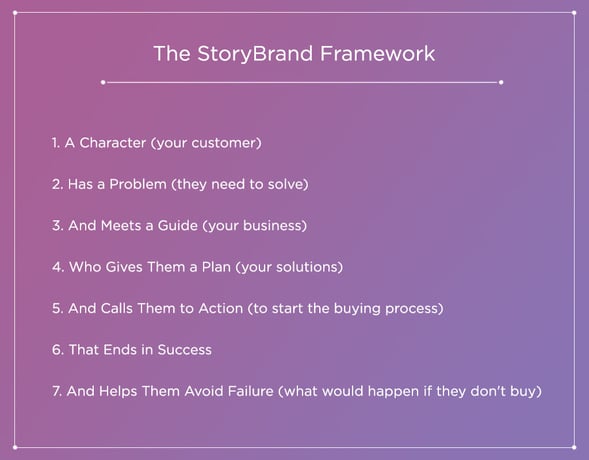 Let’s look at how the seven elements of the StoryBrand Framework come together for effective donor messaging.

A story always opens with a Character. The story starts to develop some tension when the character encounters a Problem that prevents the character from getting what they want. All great stories have such tension.

The stories we tell our donors via our campaigns are most effective when we clearly define both the want and the problem as it relates to our mission. As campaign crafters, we can often fail to specifically define both the want and the problem. A vaguely defined desire prevents the character from a passionate pursuit of its fulfillment. Likewise, a vaguely defined problem prevents the character from focusing on a singular resolution or path to fulfillment. Sometimes the problem is vague because we’ve named too many problems all at once. Problem overload is common when we try to shoehorn every problem into one communication.

It’s helpful to remember that if we’re going to follow a story from beginning to end, we must know what the story’s about at its core. The difficulty for nonprofits is choosing the core because that means—for this campaign, at least—there are other valid, worthy problems that will not be used as the core. But to be effective, you must choose a single core for the story. (All those other options? You can save those for another campaign or for use in an A/B test or versioned communications.)

After you have defined a Character with a Problem, then the character meets a Guide. This guide connects the character to the resolution they seek. In our donor communications, the nonprofit organization fills the role of the guide. Next, the guide gives the character a Plan. and then calls them to Action. The plan is the solution to the problem, and the action is the character’s choice to act on the plan. For a donor campaign, this plan is based on your nonprofit’s mission and approach for solving the problem, and the call to action is for the donor to partner with your nonprofit through giving.

Even the most effective donor campaigns can stall out at the Plan and Action elements if we fail to clearly present our mission and the impact that’s possible when donors act. Our campaigns must include a clear call to action—and preferably a singular invitation so that donors know exactly how they can resolve the tension they feel.

The final two elements in the framework focus on the result of the character’s action. When the character acts, it Ends in Success and Helps Them Avoid Failure. Both potential outcomes are part of a good story, contributing to the tension of the narrative arc. For our donor campaigns, we need to paint a picture of the world that’s possible when donors partner with us.

Our campaign’s call to action must forecast that we’re helping donors achieve success and helping them avoid the mission’s failure.

With the StoryBrand framework in hand, we can craft effective campaign messages every time for our donors. These seven elements ensure that the donor clearly knows what the story is about. This is true whether they’re encountering a campaign digitally, opening a direct mail piece, or sitting down face-to-face with your major gift officer.

The StoryBrand framework ensures your campaign answers questions like these for each donor:

Within the core story you choose for your year-end campaign, you’ll want to weave in a few subplots to gear the message to your donor segments. For each donor segment, keep in mind what’s important to them and use that to guide what we say about the story to them. Maybe the major donors care about a particular aspect of the success. Maybe your mid-level donors are passionate about a particular part of the plan. The invitation to act will also vary by donor segment. Such nuances will make your campaign more effective—as long as the core of your campaign’s story remains strong.

You can begin applying the StoryBrand Framework to this year’s year-end campaign. There’s still time, whether your campaign is already in development or you haven’t even put a moment’s thought into it yet. Take the seven elements and write out each one as it relates to your year-end campaign ideas. If you need additional help and guidance, the team at Pursuant is always ready to step in for a consultation.