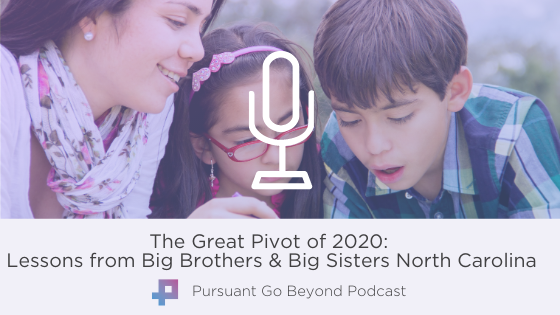 In 2020, the COVID-19 pandemic challenged nonprofit organizations to act quickly and make bold decisions to face abrupt economic and logistical changes. We’re kicking off a series of interviews with fundraising practitioners who navigated the “big pivot” with poise.

In this episode, Debbi Stanley, CFRE, sat down to interview Holly Ferree, Vice President of Philanthropy at Big Brothers Big Sisters of the Central Piedmont in North Carolina. Along the way, they unpacked:

– How Big Brothers & Big Sisters shifted to serve their constituents and volunteers in a sudden, virtual-only environment and pivoted their messaging to donors
– Ways that their donors engaged deeper to resource the increased challenges the organization was addressing
– How Big Brothers & Big Sisters shifted from in-person galas to virtual fundraising events and invested in stewarding their most valuable supporters

The following is an edited transcript of their conversation.

From a programmatic standpoint, the pandemic was a huge shift. Our organization makes matches between mentors and students. Those are relationships that are generally in-person and centered around physically getting together. And so that stopped almost immediately by the end of March. I think our case managers, who are there to keep the relationship going, had to deal with things differently.

Everybody was trying to learn how to use Zoom or a similar format to stay connected, or was it going to be through mail, or would it be through phone calls? That all depended upon our kids and what kind of technology they had.

It depended on whether their parents or parent or grandparents had access to the Internet or technology they could share with their child. And of course, at that time, they were wondering how is school going to be affecting them.

And then you have the same question with the volunteers. We have a lot of college students who volunteered, so they were maybe ahead of the curve as far as maneuvering their way through technology. But then we also have a lot of older volunteers, and Zoom was maybe something totally unheard of for them. That was a big learning curve. Then a lot of our kids and our families needed much more than just the connection with their child’s mentor. They needed things like the Internet and maybe even clothing or food. We had to shift in how we were serving our children.

With all that came messaging that we carried over to our donors to let them know, “Hey, we’re still here, and we’re still doing things for the children that we’re serving, and you’re still very much a part of this, and we need you.”

Even though the kids did not see their “Bigs” in person, we tried to keep them connected. Because now, more than ever, they’re already behind in so many different ways. They were facing challenges like single-parent homes and disadvantaged circumstances, economically speaking. Some of them were already behind educationally in the learning curve. So here we are, and this pandemic puts them behind on another level.

And so we wanted our donors to realize that we’re still doing stuff. It just looked a little different.

We were worried that we would lose folks, but I think the people donating to us hadn’t been too affected by the pandemic yet. We didn’t lose donors. We saw some donors, especially those who have been with us for a while, dig a little deeper into their pockets.

People responded to those events well. Of course, we were also able to seize the moment with the PPP loans, which helped us not lay off anybody. We also were able to rely on the fact that we’ve got 42 years of experience and longevity in the community. And we have an executive director who’s been around for 25 years. It helped. People knew our executive director, and so they were willing to support us wholeheartedly.

Many folks who I’ve talked to in these interviews saw an influx of new donors in 2020. It sounds like that was something that you guys had as well. How are you deciphering who you invest in? Retention? Have you changed any of your stewardship strategies? How has that affected your goals for 2021?

We are still kind of reeling with everything that’s happened. I think that’s something we do have to think about going into 2021. Some of our events are still virtual. We’ve had to come up with some new events because we did experience a shortfall. Our gala usually raises $100,000, and it raised 80. We have a Bowl-a-thon, and it had to be changed to virtual, which was fine. Now we’ve come up with this trivia for kids’ sake. It’s a virtual thing.

Even with the gala, we had new people that I don’t think — had it been in person — who would have taken time to travel or get dressed up to go to a country club event. I think we got new people in because of that. Then we kept some of the same folks.

Our donor database has a new feature on it where you can send an email video, so now I can email them right away when they donate. It’s me saying, “thank you so much.” They feel a connection with a person and not just an auto-generated email.

What is the general database that you’re using?

Network for Good. They’ve been great to work with during this time. They’ve offered a lot of ways to thank donors and to capture names through the different tools that they offer. That’s been one of the greatest advantages, to sit here and click and say, “Hey, thank you, Debbie, for your donation. We appreciate you. You’re new to the family of donors for Big Brothers Big Sisters.” It’s just a nice touch.

Right before the pandemic hit, we had two offices because we serve Guilford County. So children in Guilford, children in High Point. We’re looking to merge the two. We had started looking at spaces. Well, we found a space, and through this, people have stepped up to help us with purchasing the facility. We plan to move into this new space in June. I think along with that is this excitement of, “okay, well, what are you going to do with it? How does this help you serve more kids?” The messaging about serving more kids, even in all of that’s going on, makes people not only want to donate to a building, but they want to donate to how you’re going to use it to serve the community.

That initiative has helped us get new donors. This capital campaign has opened up some conversations about our program with people brand new to our file. When talking to those giving online, you need to randomly pick some folks, call them, and say, “Hey, why did you decide to do this?” And start cultivating a relationship that will lead to a deeper commitment or larger gifts. It can take a while to cultivate folks, but you also have donors who have been with us for a long time. We’re having these conversations regularly with them more about, “these are things that are going on. This is what’s going on with our kids. This is a great story of this match here, they went out and bought a birdhouse, and they’re going to build it online together.”

So when a donor hears that, they’re thinking, “I want to make sure that that does not get lost for any child, so I want to give you more to help you through this time.”

I’ll also ask them, “can you open up a conversation with one of your friends who you think would buy into what we’re doing and want to hear more about it?”

All of this has helped to open up these conversations with new people and to bring donors closer to us and know what we’re doing.

Are there other investments, platforms, or technologies that you’re using, that are going to help you create greater donor connection?

We’re going to move toward it. We’re looking at a platform to help you with accepting gifts of stock. It’s easier to give a gift, a larger gift, through donor-advised funds. So we have talked to a company that can do that.

Right now, we only have a couple of folks who give us gifts in that way, primarily because we don’t market it that way.

In those cases, we have a relationship with somebody who has a financial advisor. So we stream it through them. I can see more nonprofits using something like this as we move forward because gifts of stock are an easy way for somebody to give a more significant gift.

What do you think is one of the biggest challenges facing not just your organization, but the nonprofit industry as a whole?

I think it’s healthy not to be held back by concerns about overhead costs. We are a business and especially a business that charges no fees to the children we serve and their families. It takes more extensive development staff to get the money going with our larger gifts. When you’re talking about working with donors who want to be closer to what you’re doing, it takes time. You can’t just shuffle people through that process. You can’t have too many balls in the air, or somebody drops. When you’re talking about a donor, they can give their money somewhere else. You have to dedicate time to somebody to make them want to dig deeper and invest in changing and being a part of what you’re doing.