Major Donors and Annual Fund Programs: Which Is More Important? 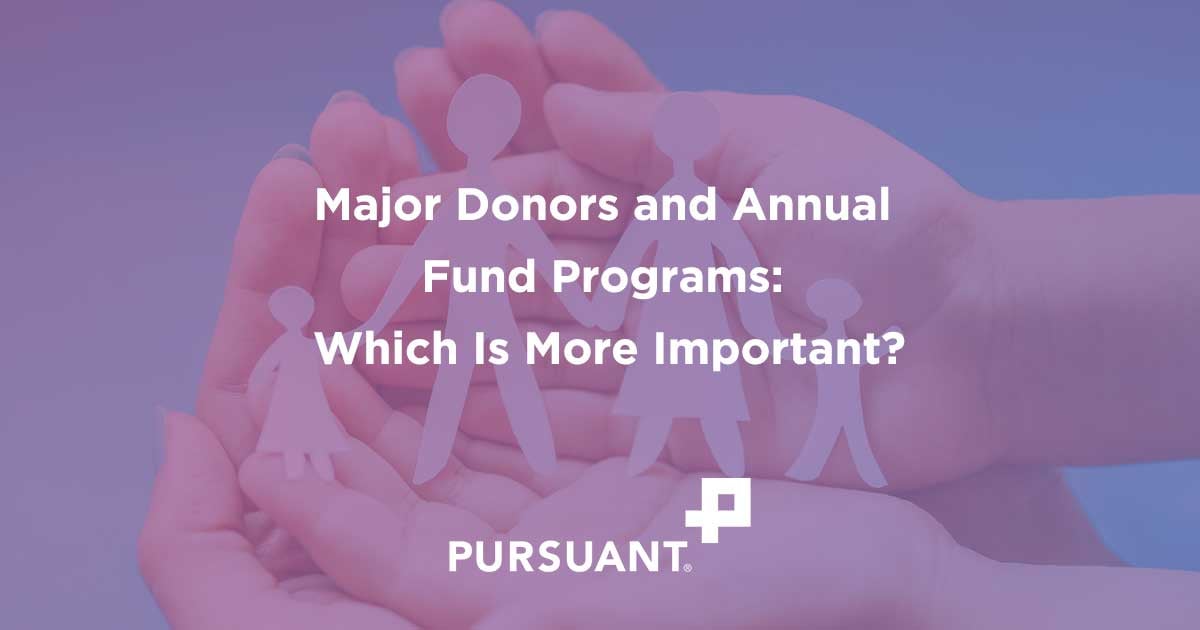 In our work with nonprofits we’ve seen a critical lapse in understanding regarding the role of major donor support versus that of annual fund/broad-based support. In the next two blog posts I want to unpack the strategic differences between these two roles.

These two important, yet very different fundraising arenas must be understood and maximally leveraged by any nonprofit that desires to implement a comprehensive, healthy, and sustainable fundraising system.

Most organizations with strength in major donor support struggle in the development of their annual fund acquisition, conversion, and retention efforts, and vice versa. This is understandable. The process of raising major gifts is extremely different from that used to cultivate productive broad-based donor relationships. Early success in the life of a nonprofit at one end of the donor pyramid usually results in an organization that relies heavily on continued success at that same end of the pyramid—to the virtual exclusion of the other end!

Organizations that seek to widen their development efforts usually do so out of a desire to find new sources of funding to meet a growing list of fiscal demands. But the opportunity is much greater than 1 + 1 = 2. A comprehensive fundraising strategy provides a wonderful platform for positioning the case for support in an optimal context—one with the potential for generating phenomenal results.

Major Donors and Annual Fund Programs: Which Is More Important?

What do major donors most like to support? There are always exceptions, of course; but generally speaking, major donors love to build capacity. They like new projects, adding new services, and extending existing services into new areas. Organizations with a weakness in major donor support are constantly struggling to find the necessary dollars to expand. There is a dearth of major gifts to build something new.

Conversely, what do annual fund donors most appreciate? The services that a nonprofit already provides, offering impacts that can be seen, heard, touched, felt, observed, and measured. Their giving, when cultivated, provides ongoing support that will sustain the work of the organization over time. Organizations with a weak broad-based program struggle to find ways to pay for new services over time.

So what’s the answer? The greatest potential for holistic fundraising health lies in cultivating gifts across the entire pyramid and presenting giving opportunities that are meaningful to both sets of donors. Major donor support can focus on funding new services, while broad-based support is cultivated to sustain new capabilities and capacities. This approach takes the pressure off major donors to support things they don’t like and off broad-based donors to support things they don’t fully understand. Donors at both ends of the pyramid can be engaged in ways that are meaningful and appropriate to their relationship with the organization.